Please refer to the official documentation here, rather than this post. 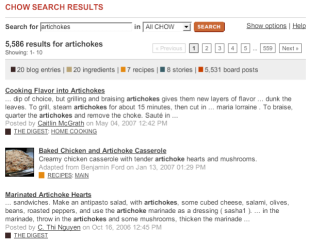 no delta, no no no

Sphinx is so fast that we don’t run an index queue. Re-indexing all of CHOW takes 4 minutes in production:

Even though Solr/Lucene was available as an in-house CNET product, we dropped it in favor of Sphinx’s simplicity.

Sphinx accesses MySQL directly, so the interoperability happens at that level rather than in-app. This means you don’t need any indexing hooks in your models. Their lifecycle doesn’t affect the search daemon.

Plus, our old indexing daemon would mysteriously die and not restart. The Sphinx indexer just runs on a cronjob.

Kent Sibilev released acts_as_sphinx a while back, but I had already started on my implementation of a Rails Sphinx plugin. As it turned out, our needs were more sophisticated, so it’s good I did.

Mine is called Ultrasphinx, and features:

Of course it inherits from Sphinx itself:

Downsides of my plugin are:

Because the SQL is generated, by paying careful attention to Sphinx’s field expectations, we can create a merged index which allows us to rank totally orthogonal models by relevance.

Sphinx does require a unique ID for every indexed record. We work around this by using the alphabetical index of the model class as a modulus in an SQL function.

I don’t have much time to support this outside of our needs at CNET. So if you need something Certified and Enterprise Ready, I guess use Lucene, or maybe that French one I can’t spell.

If you need something faster, simpler, and more interesting, Sphinx + Ultrasphinx will be awesome.

Patches welcome; just ask if you want to be a committer. The support forum is here.

Who just searched for “señor fish”? Not kidding:

Hopefully it’s better than the shrimp burrito I made the other day. That was kind of gross.