I got a Nintendo Switch and was very frustrated with the graphics quality. Aliasing and poor texture filtering abound in Zelda BOTW and Mario Kart 8. I think this is primarily an issue with the games, not a limitation of the Tegra X1 platform, but we need to fix it all the same.

bring in the cables

This led me to purchase a strange device I had wondered about for some time, the Marseilles Networks mCable Gaming Edition. The mCable is a video processor similar to a Darbee, but in a very unusual form factor: a “smart” HDMI cable powered by USB.

The cable includes an ASIC that applies anti-aliasing at pixel edge boundaries, and slightly modifies the color balance. There may also be some softening filters to reduce posterization.

1080p 60fps sources are post-processed but remain 1080p. The mcable does upscale 60fps sources at resolutions below 1080p to 1080p, and apparently will upscale 30fps or lower sources to UHD. UHD/4K sources are passed through with no processing. There is no configuration ability whatsoever.

I captured a scene in Kakariko Village (direct HDMI capture with an AVerMedia LGP 2) to compare: The mCable also upscales 720p input to 1080p. If you happen to have a source that renders to a 720p framebuffer, the mCable’s scaler may be an improvement over the source’s or TV’s scaler. BOTW, though, renders to an internal 900p framebuffer, so setting the Switch HDMI output to 720p is strictly worse than 1080p, even with the mCable.

Mario Kart 8 appears to be also rendering above 720p internally. Here’s a similar set of video captures, including 720p input: 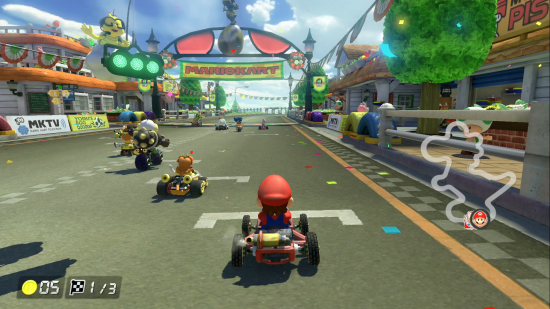 As you can see (especially in the zoomed-in Zelda shots and the Mario Kart 1080p video), the mCable does a surprisingly good job given the limited input information (no geometry, no supersampling, no temporality). To me it looks better than the typical FXAA implementation.

The effect is even more pronounced on the Xbox 360 than the Switch, and I imagine the PS3 as well. The effect is less…effective…on softer and more photo-realistic images, and it can’t do anything at all to UHD sources. The most noticeable defect introduced is some pixel-width ringing around menu text and other extremely high-contrast lines.

I measured input lag with a Leo Bodnar device and did not see any material difference over an unprocessed connection.

I like the mCable. It makes games with missing AA look much better on big screens, increasing the apparent detail and reducing annoying shimmer and crawling lines.  I don’t like the fragile cable form factor or the lack of configurability compared to a traditional video processor. Nevertheless I bought two, one for the Switch and one for an Xbox in a different room my son uses to play Kinect.

I haven’t tried the mCable with movies (it switches to a different processing configuration on 24fps sources) or the PS4 Pro. I don’t really see how the mCable processing could improve on the native upconversion in my projector for Blu-ray, or in the PS4 Pro for games, but maybe someday I will test it.

If you don’t mind the price, and you have a big TV or projector, buy an mCable and your Switch games really will look better.

Marseille now offers the mClassic for retro gaming, which is similar, but in a better form factor (dongle) and with the added benefit that it preserves 4:3 aspect ratios, which the mCable does not do.